HALCON UPDATE:
Hal Con is over, had a GREAT time.  It is incredible, as a little known indi writer and publisher, to meet people that are excited by your work.  It gives you this charge...

As always, new mechanics and setting ideas where tested and found to be awesome.  There was this moment (well, there were a lot, but it would take too long to write all of them out) when I was explaining how a failed roll in mental conflict does not force a character to take a certain action... that free will was inherent to the system... but by choosing not to follow the incredibly strong compulsion, the character would suffer stress and could, eventually if they continued to resist, suffer mental trauma.  BUT, the choice is always there.  One players eyes looked like they where gonna pop out of his head, the idea that a system could do that blew his mind.  It was awesome!

And of course, got some new ideas from the experience.  Can't wait until next HALCON.  Might have to start branching out soon to other conventions. 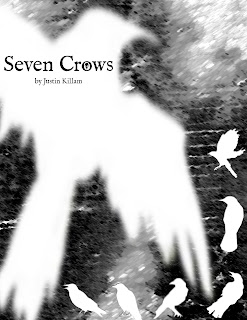 Playing around with photoshop and cover ideas for the novel.  This will be my first novel, I am aiming to have it published by the end of the March via ePub and Lulu.
Posted by Hunt and Killam at 6:41 PM