Apocrypha Studios
An independent Atlantic Canadian studio venturing into the field of imaginative storytelling RPGs, Graphic Novel and Fiction publishing.  The studio is gearing up for their next big project, a multi-media release centred around the setting of Eden Falls.  At HAL-CON 2011, Apocrypha Studios will be running their first official playtest of their Providence System within the Eden Falls setting.  Players will have a chance to create their own characters within a desecrated and doomed vision of the modern world, and fight for their very souls in a blend of survival / psychological / action horror.  As an official playtest of Eden Falls, all players will have their names in the credits of the Eden Falls RPG as playtesters, and there will be some sweet APOC swag to be given away.
Eden Falls:
a game of Choice and Ignorance, Consequence and Horror, Revelation and Judgement. 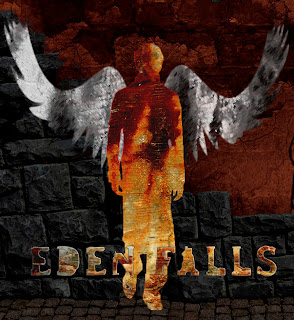 An interactive storytelling game, Eden Falls takes place in a world that has been judged and found unworthy.  Abandoned, all fight over the diminished resources of creation, and players struggle with powers both greater than themselves and within themselves, with their Soul as the ultimate prize.  Life and death are merely one of the wars that can be waged in Eden Falls, with Madness and Sanity, and Damnation and Salvation being just as important and just as deadly.  Governing the setting is the Providence System; a system of simple foundation, but intuitive expansion to fit any situation.  The Providence System also reflects the setting in providing thematic reasons for surprising rolls of the dice, and using a standard system of combat for physical, mental, and spiritual conflict.
With but the first step did stumble and taste,
Offering innocence to the sweet forbidden,
To gain eyes forced wide and scoured by the All,
Pained by what could no longer be seen.
And with bitter wept eyes did I see.
Angels wielding weapons of savage desperation,
Shadows of abject hunger slithering through cracks,
Hands raised in need of a once more blind eye,
Above and below a burnt black firmament,
Across ash fields of a paradise nowhere.
Removed from His sight,
Without Grace of the Word,
All fight over but a shattered sphere.
In this garden of ruin and despair,
All are forsaken!
-- the Hartshorn Apocryphon
Posted by Hunt and Killam at 7:43 PM